A couple of weeks ago someone broke into our apartment building's storage cellar. When I was cleaning up the mess the damned thieves had left behind, I found a bag with some electronics junk stuffed into it that I had completely forgotten. Amid the junk was a rare jewel, the motherboard of a Commodore 64 from 1987! I have no idea what had happened to the case and accessories, maybe the thieves got them, those bastards!

The Commodore 64 was a pretty nifty piece of hardware and very popular in Finland in the 80s. It had 64 KB of memory and most importantly thousands of games. The graphics hardware supported up to 8 sprites (with multiplexing many more could be produced) and the SID sound chip is still used by musicians today to get that oldschool sound.

Anyway, the motherboard was in a pretty bad shape and the fusebox of the transformer was missing. That wouldn't do! So I visited Bebek, a famous electronics shop in Helsinki to get some parts. The owner of the shop, Mr. Bebek is a very nice chap who has had the shop for 40 years. Although he is retired he can be spotted in his shop every now and then. I bought a new fusebox and a 160mA fuse, and as an added bonus a male DIN-8 connector, some speaker cable, and a couple of RCA plugs (more about these in a bit).

Fixing the transformer was a matter of minutes with a soldering iron (the wires were rather thick so I needed to heat them pretty long with my 15W iron). The next problem was to hook up the C64 to a display to see if it still worked. Now, the way C64 were hooked up to a display in the old days was to use a RF adapter which transformed the output signal to a RF signal for a TV. I didn't have a RF adapter so I had earlier googled up "commodore 64 tv out." Luckily the C64 was advanced in its time and it could also produce component video signal through the video port. Among the google hits was a page describing the pin outs of the C64 video port.

Using the instructions it was pretty easy to make a cable with a DIN-8 connector in one end to plug into the video port and two RCA males in the other end with component video and mono audio. I quickly assembled and attached the cable between the C64 and a monitor and nervously turned on power. Two seconds later to my amazement an old childhood friend of mine, the classic light blue, deep blue welcome screen of the C64 basic appeared on my Dell.

I have no games or a floppy/tape storage drive for the C64 and the motherboard is in dire need of a case to protect against the elements. I'll probably come back to this project later. My part shipment including the Arduino arrived soon after this, so I had already other projects in my mind... but more about those later!

Ideas for future projects:
(oops this post got a lot longer than "the brief intro" that I promised to myself, better fix this for the next post before it becomes a habit!) 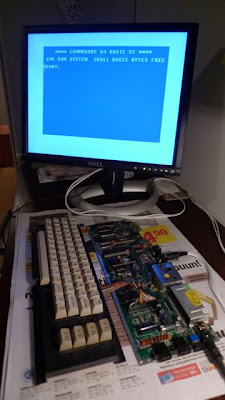 This blog is about my endeavors into the world of electronics and microcontrollers. I have always wanted to learn electronics but it wasn't until recently when I got an Arduino microcontroller board that things started to really click. I figured soon that I need to write things down or otherwise I start forgetting what I have learned. Hence this blog.

The blog serves two purposes. It is intended as a notebook for myself so I expect most posts to be quite brief. But if you're an Arduino beginner like me these ramblings might as well be interesting to you too!

Posted by Unknown at 9:09 PM No comments: